On Wednesday, le Comité Colbert, an association dedicated to the French luxury industry, launched for the first time an advertising campaign to defend the territorial anchoring of luxury, its French know-how and its thousands of jobs.

Since its creation in 1952, the committee had never done an advertising campaign in its own name. A first in 3 visuals that will be distributed in the press to defend the role of French luxury: it “continues to open sites in the regions”; it is the “first school of knights” of the arts and letters (66 craftsmen decorated since 2006); it creates “objects of lasting desire”. 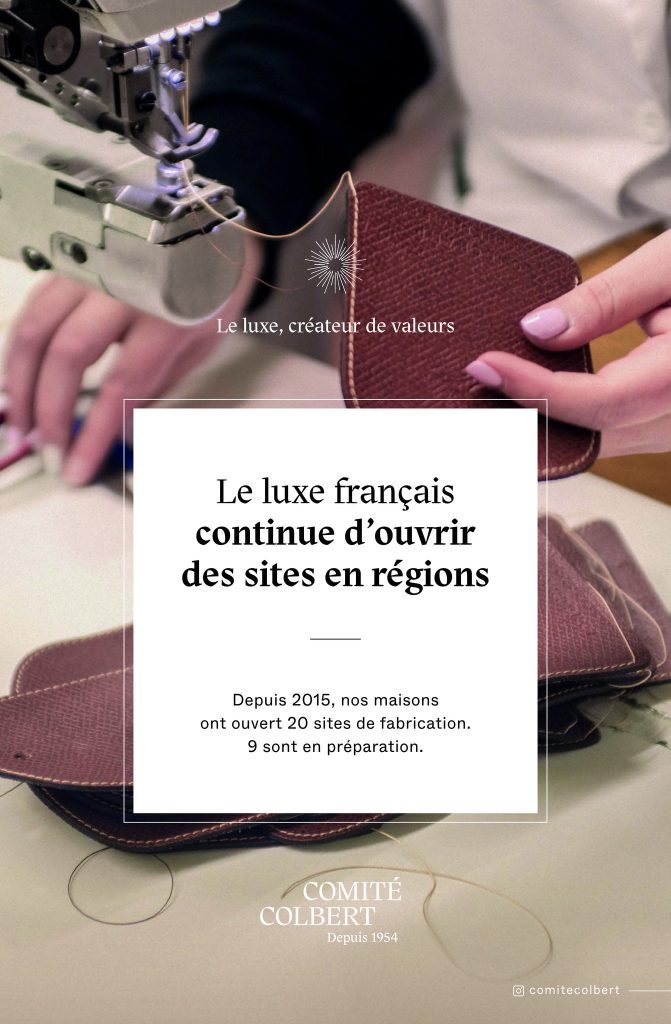 “Almost all French territories benefit, in one way or another, from luxury jobs”, according to the committee.

The committee points out that some 20 production sites have opened since 2015 and that they have provided around 3,500 direct jobs. In addition, nine sites are in the process of being opened for leather goods and crafts.

“No other industry in France, employing directly and indirectly a million people, has such a strong presence in the regions while continuing to invest massively in them with nine new sites opening in the coming months and the hiring of thousands of employees with or without qualifications,” Bénédicte Epinay, general delegate of the Comité Colbert, told AFP. “With fourteen schools within our companies, the luxury industry is fully mobilised to safeguard and pass on the know-how of excellence faced with a lack of training facilities. However, every year, more than 10,000 production jobs are not filled.

These are professions for which apprenticeships can be carried out in certain houses: “10 to 13% of the workforce of French luxury houses are employees undergoing training”, and “up to 90% of novices are hired in artisanal professions”.

The Colbert Committee is therefore trying to promote the luxury industry as best it can in these times of crisis. Just last year, the committee wanted to make the voice of French luxury heard by considerably improving its communication: increased presence on social networks, new website, future launch of a platform on WeChat….