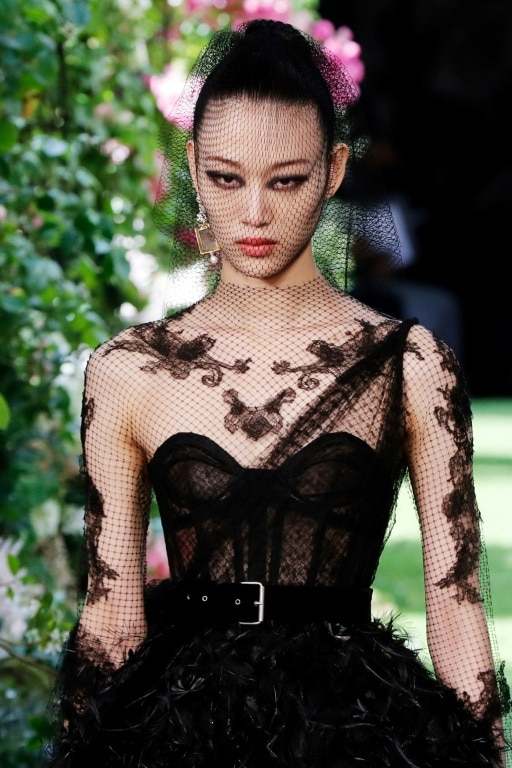 With a series of all-black bustier gowns that would not have looked out of place on Grace Kelly, a vintage mood reigned on the catwalk at Christian Dior on Monday – although even the historic setting for the show came with modern twists.

Held in the French label’s headquarters in Paris, where founder Christian Dior presented his designs until his death in 1957, the brand’s latest Haute Couture collection was rich in nods to that era, with capes and A-line silhouettes galore.

But rather than a 50s-era salon, celebrity guests including actress Priyanka Chopra and singer husband Nick Jonas wound their way through rooms adorned with smoke patterns in the darkened, revamped townhouse, while a huge artificial tree with creeping roots invaded the central staircase.

The styles on show also mixed the old and the new, with lightweight materials giving some of the black dresses a diaphanous air.

“Now we can make a corset that is comfortable too,” designer Maria Grazia Chiuri said of the collection, inspired in part by the work of late architect Bernard Rudofsky, who explored the relationship between buildings and couture.

Haute Couture fashion week, which runs until July 4, is a showcase of one-of-the-kind outfits by designers that have to abide by strict rules over their confection, as opposed to more mass-produced clothing.

Chiuri said she had focused on black for this collection in part not to distract from the design. “If you want to speak about the line, black helps,” she added in an interview.

Silvery, Grecian-style dresses provided a few flashes of color, in looks inspired by caryatid – the sculpted female figures used as columns, and which adorn many buildings in Paris.

One model took the architectural theme even further, closing the show with a dollhouse for a dress, in a golden version of Dior’s 30 Avenue Montaigne townhouse.

The house-dress was designed by artist Penny Slinger, who made the set for the show.

Chiuri, an Italian who was named as the womenswear designer at the LVMH-owned label in 2016, was set to receive a Legion of Honour, France’s highest civilian distinction, after the catwalk display on Monday.

L’Oreal in talks to buy Mugler, Azzaro brands from Clarins