[Luxus+ Magazine] The artistic director in fashion: a profession in full mutation (Part 1)

The Natural Diamond Council (NDC) announces the imminent launch of its first “For Moments Like No Other” campaign. Featuring actress Ana de Armas, the campaign will give natural diamonds a dreamlike dimension while drawing attention to a luxury of meaning, value and authenticity.


Ana de Armas is a rising Hollywood star. She recently received a Golden Globe nomination for her role in “Knives Out“, and she will soon be appearing in the upcoming James Bond movie, “No Time to Die“.

Embodying a rising, free-thinking generation, Ana de Armas was approached for this campaign because of her elegant appearance, dynamic personality and laid-back attitude, which reflect the next chapter in the history of natural diamonds: a mindset where the traditional principles of wearing and trading diamonds are being challenged, leaving the playing field open.

“Ana is a real talent, and her dynamism is exactly what we are trying to do on a daily basis to support the natural diamond industry,” says David Kellie, President of the Natural Diamond Council. “This campaign redefines traditional diamond moments, celebrating a variety of personal connections to these natural stones. It’s a more contemporary approach to the dream of diamonds, for significant moments, big or small. “

An invitation to discover the world of natural diamonds

The Natural Diamond Council represents seven of the world’s leading diamond producers. All members are required to adhere to the group’s ethical codes of conduct, which focus on respectful and sustainable mining practices while supporting women and families in diamond mining communities. The “Only Natural Diamonds” portal is a gateway to the world of natural diamonds.

An international campaign, filmed in Europe, by a French production manager.

Filmed on the Portuguese coast, the For Moments Like No Other campaign was directed by Manu Cossu and photographed by Camilla Åkran.

It was unveiled on 20 September 2020 at the first ever virtual Emmy Awards ceremony. 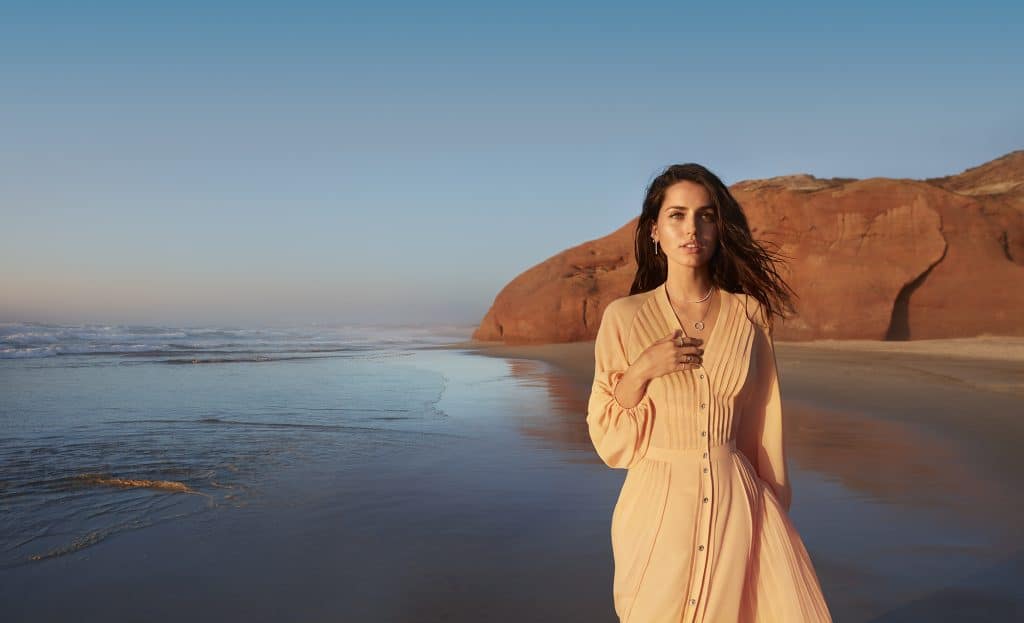 The 30-second spot on the campaign’s heroes, broadcast at the Emmy Awards, is complemented by a series of short videos, highlighting the different relationships depicted in the clip.

Ana de Armas can be seen in open-air settings with friends, family and a partner. From a barefoot party in a fragrant vineyard to a tangerine sunset along the Portuguese coast…the clip highlights a new and open association: Diamonds are not only related to romantic situations or formal occasions. They are intended for all kinds of moments.

After its launch at the Emmy Awards, the campaign will be presented in international print media and will also be accompanied by TV spots in the United States. It will be visible worldwide, including China, India, the UK and France.

In addition to welcoming its first Hollywood star, the new campaign marks a number of “firsts” for the Natural Diamond Council.

It is the first campaign by a group of diamond dealers supporting approximately 10 million people worldwide.

It is also the first campaign dedicated to the NDC’s “Only Natural Diamonds” platform, as well as the first NDC marketing initiative to showcase so many jewellery designers working with natural diamonds in an exceptionally contemporary way.

Please note: the designers and international brands featured in the campaign all use diamonds from Natural Diamond Council producers.

The 12th edition of the Hermès jump, postponed to 2022

Cetelem Observatory: Survey on luxury made in France among French people

[Luxus+ Magazine] The artistic director in fashion: a profession in full mutation (Part 1)