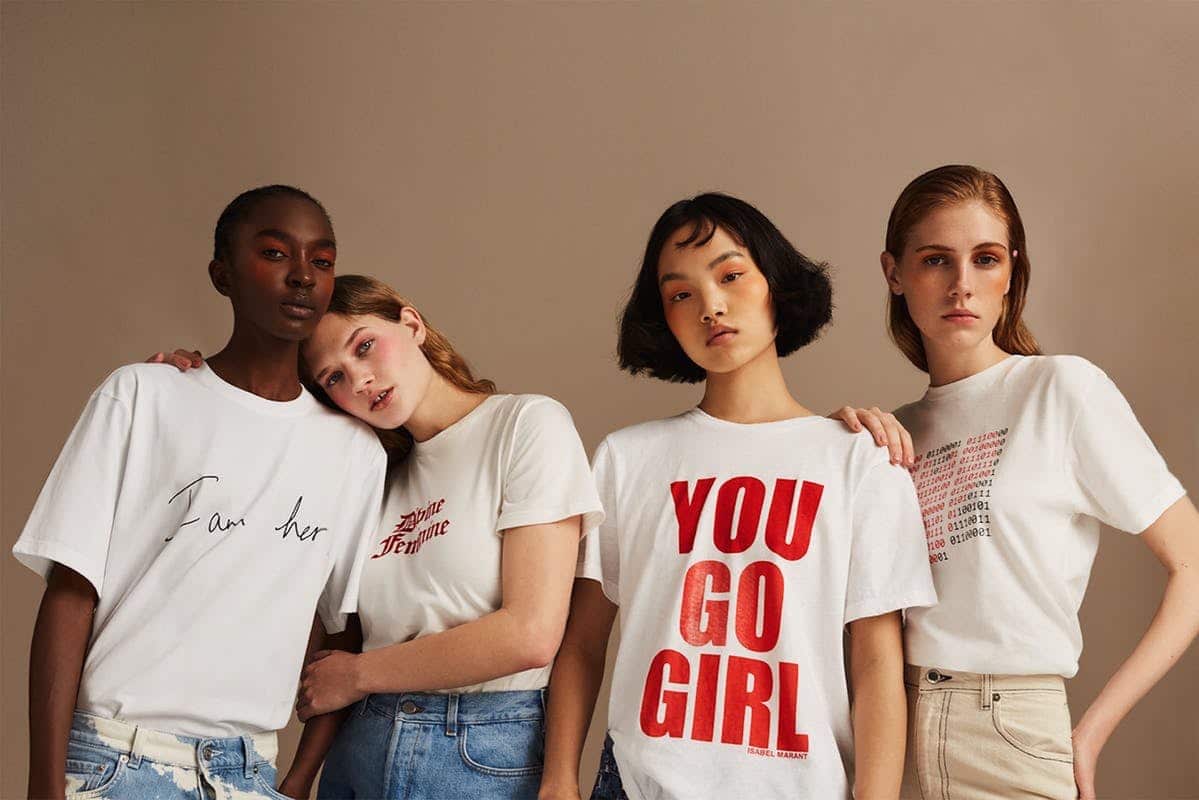 For the second time, Net-a-Porter invited women designers to design T-shirts for a collection of capsules in honour of International Women’s Day. Responding to the call were Victoria Beckham, Isabel Marant, Ellery, Rosie Assoulin, Alexa Chung and Perfect Moment. 100% of the proceeds will go to Women for Women International, a non-profit organization that helps women in war-torn countries rebuild their lives.

Victoria Beckham’s minimalist T-shirt celebrates brotherhood and compassion, with the phrase “I Am Her” written by Beckham. Isabel Marant, on the other hand, has decided to follow a more vibrant path by embellishing her T-shirt with the words “You Go, Girl” in bold red characters. All the T-shirts are already available on Net-a-Porter, with prices ranging from US$130 to US$220.

“We are delighted to once again support the humanitarian work of Women for Women International in partnership with six very talented women designers,” said Alison Loehnis, President of Net-a-Porter, in a release.

Brita Fernandez Schmidt, Executive Director of Women for Women International, added: “Each T-shirt in this collection sends a powerful message of support and solidarity. Through this campaign and the vital funds raised, Net-a-Porter, along with six inspiring women designers, are helping to transform the lives not only of the women we work with, but also of their entire communities.”

This collection is the last ever designed by Karl Lagerfeld and this final show, the last one he imagined: a snow-covered village setting in the Alps, with ten life-size chalets with smoking fireplaces…

This autumn-winter 2019/20 collection fell the curtain on the couturier’s career in a house he had joined in 1983, a dozen years after Coco Chanel’s death.

40 models were gathered in front of the main chalet, before Karl Lagerfeld’s close friend and DJ Michel Gaubert invited them to a minute of silence. A few seconds later, Karl Lagerfeld’s voice was heard in the speakers, evoking the reasons that had led him to join Chanel, and a sweet bell in the distance announced the beginning of the show, entitled Chanel in the Snow.

The models were walking on fake snow covering the 120-metre podium. Cara Delevingne, a long-time ambassador of the house, had the honour of opening the show with black and white checkered pants and a matching hat, under a huge houndstooth coat.

Dutch model Luna Bijl closed the event, only two looks after Penelope Cruz, another Chanel ambassador, who was dressed in a white mink snowball skirt, an elegant collection to end her career in style. According to his team, Karl Lagerfeld had visited Chanel’s studio the week before his death to make the final changes. The show also punctuates a tradition of monumental events imagined by Karl Lagerfeld at the Grand Palais since 2005 that will be remembered.

” It is a day in memory of a great friend who had a good life. He was a noble and very generous gentleman,” sighs Gérard Wertheimer, who owns the Chanel house with his brother, Alain Wertheimer.

Continuing Chiron’s 110th anniversary celebrations in 2019, Bugatti unveiled a unique car at the 2019 Geneva Motor Show: the coupé, La Voiture noire, is considered the most powerful, luxurious and exclusive car in the world.

“The true form of luxury is individuality. The black car is now at the forefront of automotive production. It is a sculptural beauty with a unique technology, the ideal grand tourism,” says Stephan Winkelmann, President of Bugatti.

The Bugatti La Voiture Noire is a modern interpretation of Jean Bugatti’s famous 57 SC Atlantic type, which was only manufactured four times between 1936 and 1938. With a minimalist and refined elegance, the Bugatti the black car is the object of desire.

The purity of its surfaces and clear lines, where even the bumpers integrate smoothly into the bodywork and where the windscreen fits perfectly into the side windows, each component has been handcrafted and the carbon fibre body has a deep black gloss only interrupted by the ultra-fine fibre structure.

“We worked long and hard on this design until there was nothing left to improve. For us, the coupé represents the perfect shape with a perfect finish,” explains bugatti designer Etienne Salomé. Its price? 11 million euros.

The jury of the LVMH Prize, chaired by Delphine Arnault, selected 20 young designers for the semi-final of the famous fashion competition, after the closing date for entries on February 4. 1,700 candidates from more than 100 different countries were studied for its sixth annual edition, before 20 young designers were finally selected.
The 20 finalists, from 15 countries around the world, will present their final projects on March 1 and 2 at the LVMH group’s headquarters in Paris. For the 2019 edition, the unisex, men’s and women’s collections will all be recognized: innovation, technical competence and the materials used are at the heart of the competition, sustainable and ethical fashion being also at the heart of many designers’ concerns, a positive reflection of the current direction of the fashion world.
The next step in the competition? The unveiling of the collections to 63 international experts, who will reduce the group to eight finalists. These finalists will compete for the first prize in June. This year, the 24 Sèvres website supports the competition and will market a number of creations created by the 8 finalists, as well as the winner’s collection in September, in order to promote a new generation of international designers.

Interparfums : The ingredients of a resilient business model