Lexus International on Tuesday March 31 unveiled plans to accelerate its electrified future by announcing Lexus brand transformation initiatives through the Lexus Concept Reveal Show and the launch of the electrified LF-Z concept.

Making its world premiere, the “LF-Z Electrified” is a concept electric vehicle that incorporates driving performance, styling and technologies envisioned for 2025. Indeed, the model will never be commercialised, it only showcases the upcoming technologies that Lexus will employ.

Thanks to the optimal placement of the battery and electric motors, as well as the new four-wheel drive control technology known as “DIRECT4”, which generates superior and highly flexible driving performance, it features an ideal dynamic balance, distinguishing the LF-Z Electrified from conventional vehicles.

In terms of range, the concept is based on a 90 kWh battery and offers 600 kilometres on a single charge (WLTP cycle). It powers two engines capable of accelerating from 0 to 100 km/h in 3 seconds. Its temperature is managed by a liquid-cooled system, so it can only handle a peak charge of 150 kW.

The interior features a “Tazuna” cockpit and an open, minimalist design, embodying a high level of Lexus’ human-centric approach, a philosophy that Lexus has cherished since 1989. 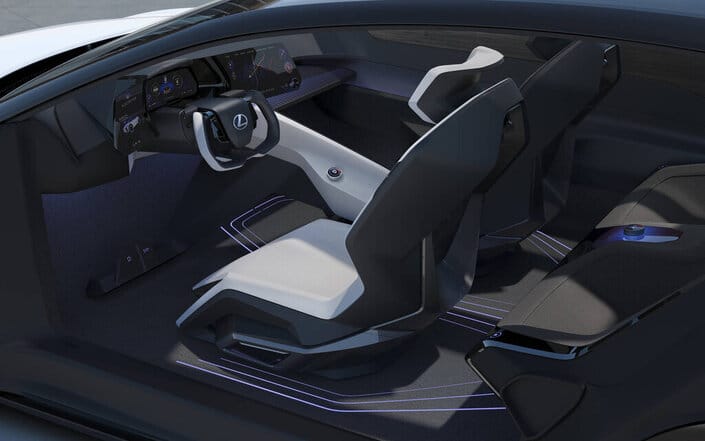 Initially, the artificial intelligence will allow some “dialogue” with the driver, and after learning his preferences and behavioural traits, it will act as a lifestyle concierge. It will, for example, suggest itineraries and restaurant reservations, etc.

Lexus International has also announced that by 2025, 10 zero-emission models will be introduced worldwide.  The brand aims to offer electric variants of all its models, with the ratio of electric vehicle sales exceeding that of petrol vehicles.

By 2050, Lexus International has set itself the goal of achieving carbon neutrality throughout the life cycle of its entire model range, from the manufacture of materials, parts and vehicles, to vehicle logistics, to the final disposal and recycling of older vehicles.

With this in mind, and with a clear mission to achieve carbon neutrality, Lexus will reduce the environmental impact of materials manufacturing processes.

To this end, Lexus International is expected to open a new business and technical centre in Shimoyama, Japan to accelerate the planning and development of diverse and attractive products close to its customers.

This facility will bring together members involved in Lexus brand development, design, production technology and planning to create the next generation of cars and where the environment will be one of open collaboration that encourages co-creation with external partners.

“I would like to express my sincere respect for all the people around the world who work so hard in the face of various difficulties. While fulfilling our social mission to achieve a carbon-neutral society, we will continue to deliver the pleasure and joy of cars, and contribute to the happiness and smiles of our customers and everyone involved with Lexus,” said Oji Sato, president and chief brand strategist of Lexus International. Beginning with two new models to be released this year, we will continue to develop innovative products that add colour to the diverse lifestyles of our customers. We hope you will look forward to the future of Lexus with its strong commitment to creating the future toward the realization of a hopeful mobility society.”

“The global vision of “Electrified Lexus” is constantly evolving and the LF-Z is a monumental leap in this journey. We are delighted to be part of this evolution as a luxury lifestyle brand aiming to deliver incredible experiences to our guests in India,” added P.B. Venugopal, President, Lexus India.

A new watch trade show in Neuchâtel in September