The manufacturer of luxury and racing cars is bringing a major new option on its flagship Flying Spur.

It took 18 months of development to be added to the luxury manufacturer’s catalogue. A world first. 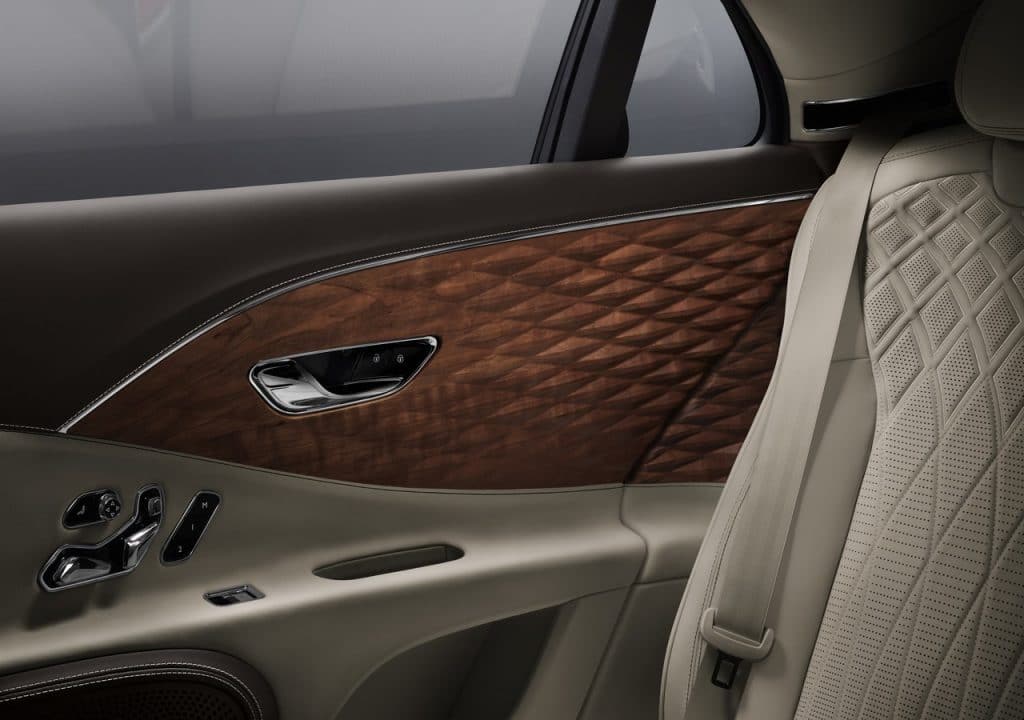 It was at the Geneva Motor Show in 2015 that Bentley presented 3D machined wood on its Exp 10 Speed 6 concept.

This approach to 3D wood impressed both the automotive enthusiasts and the press.

This convinced the English company from Crewe to offer it in a production model.

More than five years later, this option becomes available on the Flying Spur, the latest flagship with the massive silhouette of the British brand.

Each piece is made from a block of walnut or American cherry, two very noble and sought-after woods.

Three-dimensional pieces of wood can be admired at the rear of the imposing five-metre vehicle.

Finally, the wood trim found inside the doors produces the same effect as the quilted leather of the seats, which features diamond-shaped patterns.

To achieve such a result, the brand, which belongs to the Volkswagen Group, decided to rely on highly skilled craftsmen who used a multi-axis milling machine with a tolerance of 0.1 mm, which is less than the thickness of some hair.

They then finish the cuts by hand to achieve a perfect result.

Finally, hairspray is applied to achieve the colour and texture desired by Bentley.

In total, there are 150 diamonds carved into the wood of the Flying Spur.

France : Geoffroy Roux advises companies to resist blackmail after the call for a boycott of French products

The large sedan, which is offered at a price of just over $300,000 for a W12 equipped version, is the only Bentley with which this option is “offered” at the moment.

Other models may be offered in the near future.

Furthermore, this type of design could one day be transposed into mass market cars using less expensive processes and 3D printing, for example.

It should be noted that today, there is not much difference between what luxury models offer and generic versions, which often have the same level of equipment.

In order to see what makes them different, all you have to do is visit the different luxury manufacturers such as Bentley, Rolls-Royce or Ferrari, for example, to have the opportunity to take a close look at the details that make them so special.

Economic Crisis: Jaguar raises $704.5 million from chinese banks and Bentley lays off a quarter of its workforce

For Christmas, Hermès imagines a luxurious box of lipsticks at $1600

6 creators from Lorraine launch the first arts and crafts box

The RealReal provides a Holiday Update

Luxury: How to target Generation Z across cultures ?