Paris stock exchange: a return to the red

This Thursday, Brand Finance published its annual ranking of the most valued French “brands”. According to the London-based consultancy’s Top France 150 2021, Louis Vuitton, Chanel, Cartier, L’Oréal and Hermès once again manage to make it into the top 10, despite the difficulties encountered during the health crisis.

Despite the fact that the pandemic has resulted in an 11% drop in the total value of the 150 most valuable French brands across all sectors, a drop of €44.5 billion in brand value, the luxury industry retains its foothold in the ranking.

“In 2020, the weakest brands suffered more, especially those most dependent on distribution, while the strongest labels held up better. In particular, those who had taken a lead”, confided Bertrand Chovet, Managing Director of Brand Finance France.

As a reminder, the consultancy first establishes a ranking representing the strength of each brand, which is determined by the use of a scorecard that includes various elements: the investment in terms of products, prices, distribution, communication and marketing, the image of the brand in the eyes of customers, employees and financial analysts, and the performance of the business (volumes, turnover, ability to build loyalty). 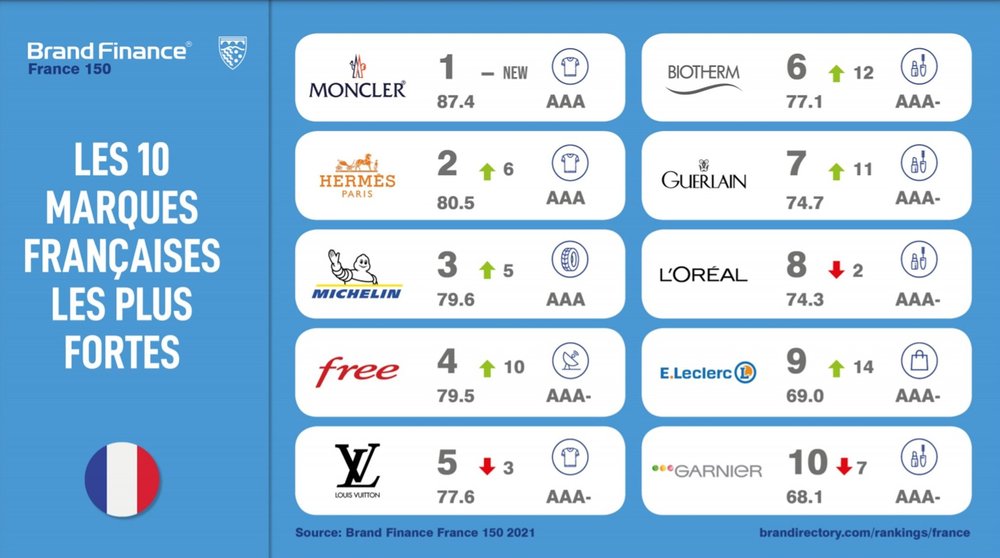 “We select the brands according to their nation of origin and Moncler still retains its tricolour logo. Not to mention the fact that it has shown an impressive performance,” explains Bertrand Chovet. “The excellent perception and strong image of the brand with customers, particularly on the consideration and reputation scores, led to this result. The brand has embraced the digital world from the outset, emphasising innovation and creativity, with a product that is both fashionable and trendy, as well as technical and efficient. It has had one success after another, particularly in Asia. As a result, its growth prospects remain very positive.

“This strong presence of luxury and premium brands in our top 10 highlights the French soft power in this category and the potential of French brands to be real and inspiring landmarks in the world, particularly in China and Asia. Interestingly, we can see French-style luxury irrigating other sectors such as the automotive industry, which is now codifying itself around this soft power by reducing its volumes to differentiate itself on quality and its French image”.

Brand Finance then links this first ranking to the valuation of the brand, which takes into account its weight in purchasing decisions, as well as its potential future revenues, based on its current revenues and profits, by calculating the royalty rate that would be charged for its use if it were licensed. 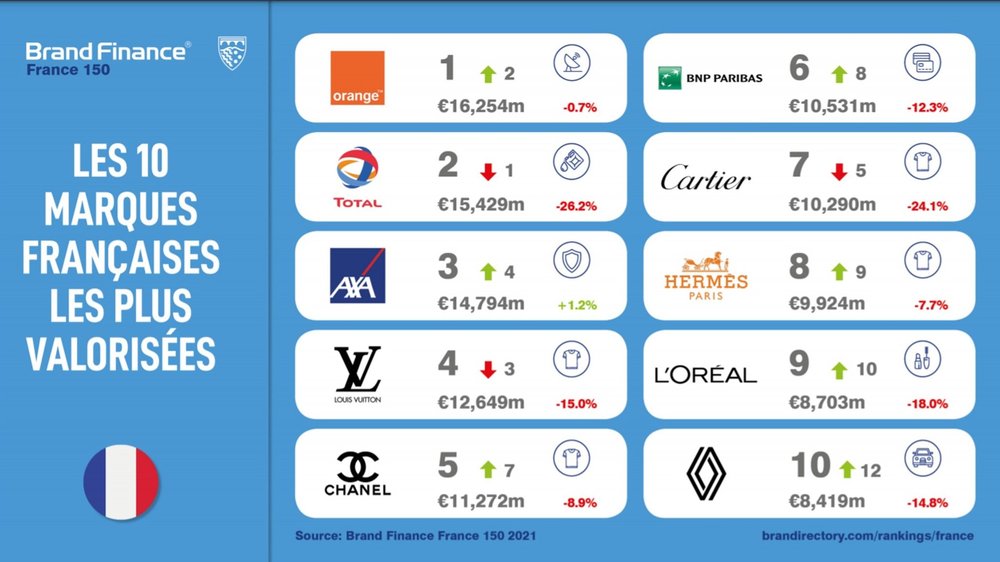 Amongst the most valued French brands, Louis Vuitton loses one place and 15% of its value, and finds itself in 4th position, behind Orange, Total and Axa. The luxury giant is followed closely by Chanel, which has moved up two places despite a 9% drop in brand value. Jeweller Cartier falls two places to 7th position with a 24.1% loss in value. Hermès, which moved from 9th to 8th place, lost 7.7% of its brand value. L’Oréal is just behind in 9th place.

“Brands like Hermès and Chanel have shown a stronger capacity to resist, because with their artisanal side and their management of scarcity, they have been able to manage demand with a different tempo and better respond to the crisis caused by the temporary closure of their shops and production centres. Their customers are willing to wait for exclusivity. Others such as Louis Vuitton and Cartier, which respond to a more impulsive part of the demand, have been more affected,” analyses Bertrand Chovet.

Outside the top 10, we find Dior in 19th place, as well as Moncler in 47th place, a first for the winter brand which enters the top 150 French brands. Givenchy is 10 places behind.

The consumer dynamic of tourists in Europe should benefit luxury

In terms of the most significant growth in value, the crown goes to Yves Rocher, Céline and Kenzo. These brands are in 52nd, 71st and 96th place respectively. Indeed, Yves Rocher’s value rose by 61%, Kenzo by 62% and Céline by 105%, which can be justified by the repositioning of the house under the aegis of Hedi Slimane.

It is also interesting to note the resilience of Sephora, which rose two places to 11th.

“Despite the shop closures, thanks to its widespread geographical presence and the implementation of various actions such as click & collect and live shopping, the brand has been able to accelerate online sales and maintain its commitment to customers. These leading brands in their categories have benefited from their brand strength to widen the gap with their competitors,” explains the general manager.

It should be noted that in the global ranking carried out by Brand Finance, luxury is also well represented among the 33 French brands present, with Louis Vuitton (123rd), Chanel (137th), or Cartier (151st) and Hermès (156th).

Read also >BRAND FINANCE 2020 : LUXURY, AT THE TOP OF THE MOST POWERFUL FRENCH BRANDS

Sephora tests the parapharmacy in France

Cannes : a positive outcome for the TFWA 2022 exhibition

Paris stock exchange: a return to the red